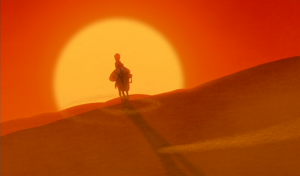 Description of Artwork: 'Arabian Nights,' the opening theme of the Disney film Aladdin, originally featured lyrics describing the fictional Arab city in which the film takes place as "a faraway place/...where they cut off your ear/if they don't like your face/ it's barbaric, but hey, it's home!"

Results of Incident: After it's release and receiving several Oscars for musical score, Disney agreed to change the two lines.