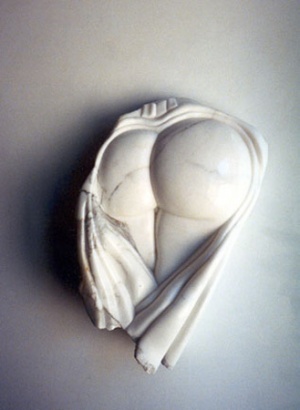 Description of Artwork: Two artworks were affected by the act of censorship. One is "Luscious," by G. Ramon Byrne, which is a marble sculpture of a woman's buttocks; the other is "Ambrosia," by Paul Zanotti, which is a mosaic showing a Roman nymph's uncovered breasts. The image here is "Luscious."

The Incident: A 40-piece exhibit was put in place in the Ventura County Hall of Administration. The purpose of the exhibit was to to showcase works that would be put up for auction at "A Night of Passion," a fundraiser to support the Ventura Music Festival.

Results of Incident: After an unspecified number of complaints within the first few hours of the exhibition's opening, the two artworks were pulled from the display. The artists were invited to submit new art pieces, but whereas Zanotti obliged, Byrne didn't. According to Byrne, since the purpose of the exhibit was to showcase artwork for the auction, "For me to substitute a piece that wouldn't be part of the show and has nothing to do with it made no sense to me."

The rest of the exhibit remained on display until March 12.