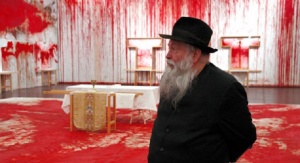 Description of Artwork: Aktions are Dionysian extravaganzas that has involved carcasses and blood, as well as pretend mutilation and crucifixion.

The Incident: No official explanation was given, but there was a widespread speculation that links the cancellation to an online petition asking for its cancellation that gathered over 5,000 signatures. According to Animal Politico, Jumex staff has denied that the petition was responsible for the cancellation. The Museo Jumex cited only that it was because of an “administrative situation”.

Results of Incident: The exhibition was cancelled.