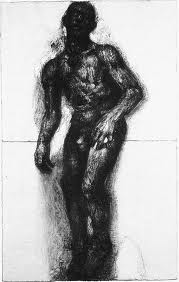 Description of Artwork: Six eight-foot tall charcoal drawings of nudes. The four that were cut feature full frontal nudity. The figures are non-sexual and are, in fact, meant to show the frailty of the human body.

The Incident: The four drawings, with full frontal nudity, were pulled from the exhibit without the artist's knowledge.

Results of Incident: Lambert was not told the exact reason for the art being pulled. She assumes that they were worried about offending parents taking their children to the coffee shop next door. She says that if she knew they would pull those pieces, she would not have allowed them to have an exhibit of her art at all. These works have been shown around the UK since 2001 and have been viewed by many children as well.

The Fermanagh District Council has not commented.