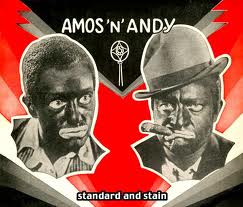 Artist: Freeman Goshen and Charles Correll were the original actors in the Amos 'n' Andy live and radio minstrel shows. Tim Moore, Spencer Williams and Ernestine Wade were the lead actors on the television version.

Confronting Bodies: National Association for the Advancement of Colored People (NAACP), the Columbia Broadcasting System (CBS) and the government of Kenya.

Location: The United States of America and Kenya

Description of Artwork: Amos 'n' Andy was a popular minstrel show that began as a live performance by two white actors in blackface, continued to become a nationally syndicated radio program and became a television program in the 1950s. The show featured several main characters: George Stevens, also known as "the Kingfish," was a con-man trying to make an easy dollar; Andy, a gullible cab driver; as well as Kingfish's wife, girlfriend and mother. The show was a comedy routine composed of malapropisms, mispronounciations and misunderstandings based on African American stereotypes.

The Incident: Amos 'n' Andy was attacked by African American Civil Rights groups for many years before it was banned from television. In 1931 the African American press petitioned the Federal Radio Commission to cancel the show because it was an unfair representation of African Americans. They believed that the show could be used, through its racially stereotypical character personalities, for whites to justify slavery and maintain segregation. CBS cancelled the television program in 1953 in response to pressure from the NAACP and other civil rights organizations. In 1963, CBS sent reruns of Amos 'n' Andy to Kenya and Nigeria. Kenya banned the show in 1963. In 1964 a Chicago television station announced that it would air reruns of the show, however, ceased after national protest.

Results of Incident: Currently, the show is being examined for its complex historical context. Some academics believe that the characters were more intricate than they appeared during the years of its production.