Description of Artwork: Andre Gill's cartoons were said to be responsible for the downfall of two French regimes. Gill was the most popular and important French caricaturist of his time. He often concealed allusions to politics in order to get his work past the eye of the censor. He was the leading caricaturist for the caricature journal La Lune. His most famous cartoon is a drawing which supposedly pictured La Rocambole, a somewhat pathetic hero from a series of popular novels, but was really a portrait of Napoleon III. The caricature brings to light the similarities between Napoleon III and the character, and everyone except for Napoleon III and his censors seemed to see this. Another of his famous illustrations is a drawing of a cantaloupe with human features retreating into the back of the page. Gill made the caricature subtle enough to escape the censors but explicit enough that everyone else recognized the cantaloupe as a portrait of a judge who was notorious for inflicting harsh penalties on journalists.

The Incident: Napoleon III had an unstable dictatorship, and throughout his rule he feared dissent of any kind. In 1852 he instated harsh controls for the press and required censorship in particular for caricatures. After Gill published the caricature of Napoleon III disguised as Rocambole the publication it appeared in, La Lune, was suppressed. Gill and the rest of the journal's staff regrouped and founded L'Eclipse in 1868. Between 1868 and 1870 at least 25 of Gill's cartoons were forbidden to be published 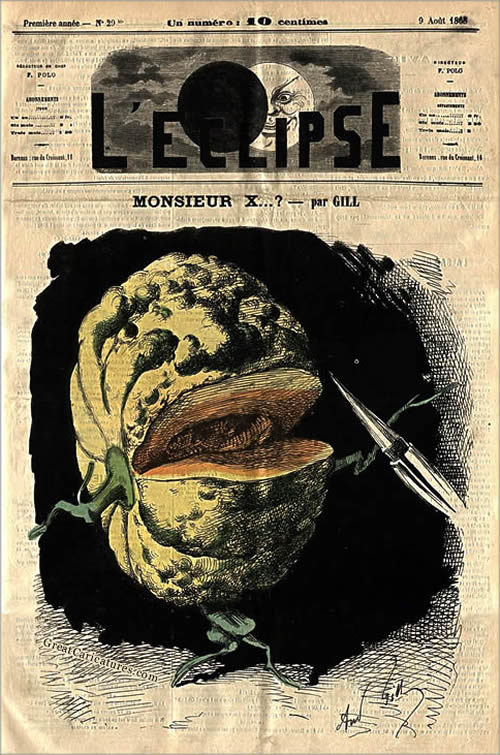 in L'Eclipse by the censors. After Gill was able to slip in the caricature of the judge as a cantaloupe the authorities were at a loss. They prosecuted Gill with obscenity and the absurd case was quickly dismissed. After Napoleon III's regime collapsed in 1870 Gill continued to wage war against the monarchy with his cartoons. During a 28 month period between 1871 and 1873, 37 of Gill's cartoons were censored. Many felt that these illustrations helped to discredit the regime.

Results of Incident: The republicans obtained electoral victories in 1877 and 1879 and ironically, this led to a decline in the popularity of republican cartoons. Gill lost his fame and spent his last years in a mental hospital.