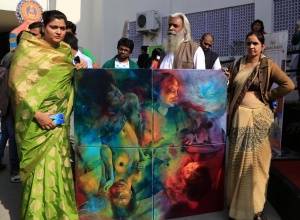 Description of Artwork: The exhibition included a polyptych by Sharma that shows four semi-nude women (topless).

The Incident: Female members of the right wing group, Lal Shakti, raided the Jaipur Art Summit and vandalized and took down pieces of Sharma's work. They aggressively took down the work and injured the artist as he tried to defend his own work from their vandalization.

Results of Incident: One of the leaders of the all female right wing organization, Pandit Vijay Shankar Pandey, was arrested by the authorities shortly after the incident. Another leader, Hemlata Sharma was wanted by the police but was identified as "absconding."