Arrest for Trespass in Mall for store bought Peace T-Shirt 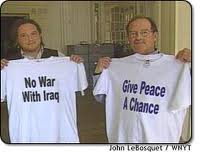 Description of Artwork: T-Shirt reading "Peace on Earth, Give Peace a Chance"

The Incident: Stephen Downs, 61, and his son were asked by mall security guards to remove their peace-slogan shirts or leave. Downs' 31-year-old son, Roger, took off his shirt. But Downs refused. The guards called police, and he was charged with trespassing and pleaded innocent. The men had had the T-shirts made at a mall store and wore them while they shopped

Results of Incident: Hundreds of protesters marched through the mall on June 4th wearing peace t-shirts. In the court hearing Stephen Downs had plead not guilty to the charge of trespassing. The Mall later dropped all charges.