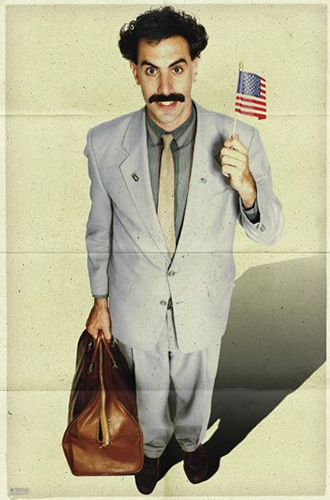 Description of Artwork: Borat is a satire of an imaginary Kazakhstan and a much more real U.S. which includes crude language and behavior, like naked men wrestling. It depicts its hero — who, while not explicitly Muslim, is from a country with a large Sunni Muslim population — as deeply backward, deeply prejudiced and deeply foolish.

The Incident: The Federal Culture and Cinematography Agency, which certifies films for public distribution, declined to do so for Borat, blocking it from the country’s movie theaters only weeks before it was to open on Nov. 30, 2006.

An agency official, Yury V. Vasyuchkov, cited the film’s potential to offend religious and ethnic feelings in a country where such feelings have been strained in recent months by ethnically tinged political conflicts and even violence.

The agency’s decision amounted to the first such restriction on a film’s public distribution — pornography aside — since the Soviet system of censorship collapsed in the late 1980s. In doing so, Russia has gone further even than Kazakhstan, the country that bears the brunt of Baron Cohen’s mock documentary.

Results of Incident: The film remains banned in Russia (the distributor is not appealing the FCCA decision) as well as in several predominantly Muslim countries including Jordan, Kuwait, Bahrain, Oman and Qatar.