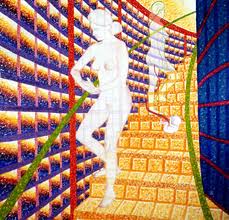 Confronting Bodies: The director of the Illinois Department of Agriculture.

Location: The Artisans Building at the Illinois State Fair in Springfield, Illinois.

The Incident: On August 11, 2000, Michele Tuohey’s painting Butterfly was removed from an exhibition on Cuban art at the Illinois State Fair. Butterfly, symbolizing her transition into motherhood and her subsequent rebirth as a mother, depicts two nude women descending and ascending a staircase. An umbilical cord stretching from between one woman's legs is attached to a fetus, with the face of an adult woman. The fetus represents Tuohey herself in her new role as mother. She painted the work around the time of the birth of her first child in 1993, and chose it for the show because of her pride in it and its highly expressive, personal nature. The painting was hung, but the morning the show was to open it was removed from the Artisans Building wall at the orders of Department of Agriculture director Joe Hampton. The reason according to Department of Agriculture spokesman John Herath, was that the painting was deemed too graphic and suggestive for a family audience at a state fair.

Results of Incident: The painting was never allowed to be shown at this exhibition. As a result, the National Coalition Against Censorship responded with a letter endorsed by numerous local and national arts organizations, lawyers and artists urging Governor Ryan to adopt a statement of artistic freedom in government spaces.