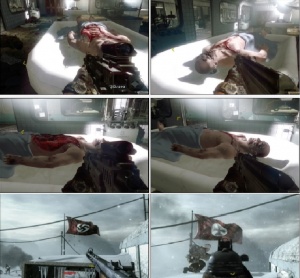 Description of Artwork: Call of Duty: Black Ops takes place during the 1960s the Cold War. It focuses on CIA clandestine black operations carried out behind enemy lines. Missions take place in various locations around the globe such as the Ural Mountains in eastern USSR, Kazakhstan in central USSR, Cuba, Hong Kong, Laos, South Vietnam, and the Arctic circle. The single-player campaign revolves around an experimental chemical weapon codenamed "Nova-6". The online multiplayer mode of Black Ops usually revolves around two teams on a specific mission.

The Incident: The BPJM (Federal Department for Media Harmful to Young Persons) decided that the game contains too much violence and that the game glorifies and rewards killing. The BPJM also banned the international versions of the game because they contain swastikas, which are against the German constitution. As a result, the BPJM told the USK (Federal Institution for Age Rating in Video Games) that they could not release the uncut version of the game. In order to release Call of Duty: Black Ops in Germany, Treyarch (the game´s developers) had to censor the gore and splatter effects, a torturing scene in the campaign, and a song by the Rolling Stones (Sympathy for the Devil). They also swapped the swastikas with iron crosses or other symbols, censored a few dialogues which contained words like "Reich" or "SS", and changed words in the multiplayer scoreboard to sound less violent (for example, "headshots" was changed to "bull's-eyes").

Results of Incident: The uncut version of the game was put on the Index List B, a blacklist of games that can no longer be advertised or sold in Germany.