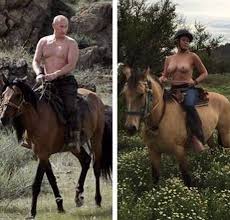 Description of Artwork: In a photo she uploaded to her Instagram page, comedian Chelsea Handler is photographed on a horse topless, with full exposure of her breasts, wearing only her jeans and a helmet. She posted this photo alongside a similar photograph of Russian president Vladimir Putin in which he is horseback and topless as well. The photograph was captioned "anything a man can do, a woman has the right to do better. #kremlin".

The Incident: The photo was removed almost immediately from the social media site, but left Handler's Instagram account in tact. Instagram claims the photo posted by Handler was in violation of their community guidelines which state "accounts found sharing nudity or mature content will be disabled".

Results of Incident: Following the deletion of her post, Handler posted a follow up photo of her violation notification from Instagram. The screenshot was captioned "If a man posts a photo of his nipples, its okay, but not a woman? Are we in 1825?". She later re-posted the initial photo of her on horseback that was taken down with the caption, "If Instagram takes this down you are saying that Vladimir Putin had more first amendment rights than me". That post was then shortly deleted by Instagram.