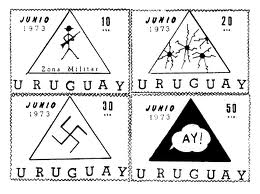 Description of Artwork: Padin's body of work consists of anti-Fascist, political performances, often performed in city streets. The purpose of his performance For Life and For Peace (1987), for example, was to denounce "compulsory disappearance" of citizens as a method of resolving social antagonism. During the performance, the abduction, torture and "disappearance" of a political prisoner was simulated. Each of the 170 blows taken to the prisoner stood for a missing person. The work ended with the presentation of a cardboard sign reading: "No More Fascism!"

The Incident: In 1973, after forty years of constitutional rule, governmental control in Uruguay was handed over to the military. Resulting from the fear inflicted by the terrorist group Tupamaros, a rigid censorship was imposed and all political activities banned. Civil rights and fair trials "disappeared" along with thousands of political prisoners. In August 1975, Padin was imprisoned in Montevideo, for the crime of "vilification and mocking of the armed forces". His article El lenguaje de la accion (The Language of Action) published in the Brazilian periodical Abertura Cultural in 1975, was used as evidence against him.

Results of Incident: Released from prison October 1977, he was forbidden to leave Montevideo, compelled to check-in weekly with government officials, and forbidden correspondence until February 1984. His two year prison sentence was thereby extended into a "ten year silence".