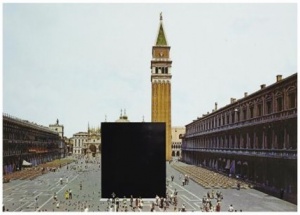 Description of Artwork: "Cube Venice" is a 50-foot sculpture designed specifically for display at the Venice Biennale art festival. Gregor Schneider was inspired by the Kaaba, the central structure at the Muslim holy site of Mecca, to design a large black cube for display in a public square. The artist has called the Kaaba "one of the most fascinating and beautiful buildings of in the history of mankind."

Of "Cube Venice," Schneider said, "The box summons us all, it allows me to look past the critical reporting and to call on the public, something I didn’t have to do before. It challenges Muslims, which didn't know this way of repproachement before, and it shows something to the visitors of the western world they have never seen before. In the history of Islam Abraham/Ibrahim is the constructor of the Kaaba. All three Monotheistic religions can identify with this building very well."

The Incident: City officials in Venice blocked the piece for "health and safety" reasons after concerns were raised over possible violent reactions from Muslim extremist groups. Schneider voiced his belief that the piece was censored for "political reasons," while city officials insisted their decision was based solely on questions of safety and event security.

Islam maintains no rule against the reproduction or depiction of the Kaaba.

Results of Incident: "Cube Venice" was not realized at the 2005 Venice Biennale. Schneider realized his vision two years later with "Cube Hamburg." The later piece met with great acclaim and no incidents of violence or backlash were reported.