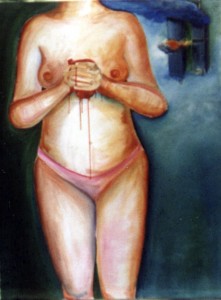 A close-up of a portion of the tapestry, created by Victoria Delgadillo

Description of Artwork: The piece contained images related to 9-11, including a bare-breasted woman holding a bleeding heart in front of the burning twin towers, and a winged figure jumping from the top of the towers.

The Incident: The display was organized by local artist Jane Castillo and Joseph Beckles to create artwork that was intended to reflect the new milennium. After about ten complaints were received about the artwork, airport officials pressured the artists to take down the work.

Results of Incident: Within a few days, after inquiries from the Los Angeles Times about the censorship, the airport officials decided to reverse the order for the tapestry's removal. It remained in circulation for the amount of time that had been prescribed for it before.