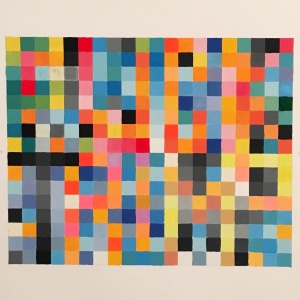 Description of Artwork: "FUCK TRUMP" is an 11x14 inch gouache by artist Brian Wiggins. The abstract geometric work is made up of a grid of colored squares that spell the words FUCK TRUMP. It was included in the original Allentown Art Museum installation of 'Hues of Red and Blue: The 2016 Presidential Election,' which was a juried exhibition of works by more than twenty artists in a range of media. The show was intended to "present critiques, lampoons, and straight-on representations of the candidates, their supporters, and issues being discussed this hectic election season” (from the exhibition press release). It opened October 20 at the Allentown Art Museum with spill-over at RE:find, a local Allentown gallery.

The Incident: After the show was installed and before the Museum's opening cocktail reception, the Museum was pressured by members of its board and the community to remove Wiggins' painting because it was too offensive. The Museum immediately removed the work in time for the opening party, placing it instead at the RE:find gallery location. Wiggins' name did not appear on any press materials, announcements, or on the Museum's exhibition webpage.

Results of Incident: Under pressure, the artist agreed to let the Museum move his work off site. His name remains missing from all exhibition documentation.