Description of Artwork: Feng was a chinese poet who advocated the importance of human emotion in literary works.

The Incident: Feng was a celebrated Chinese poet until he ran awry of the Communist Party during the 1950s. He was a spokesman for the party, upholding the view that literature and human emotion should remain separate. In 1952 he became the chief editor of "Wenyibao" (Literary and Art Gazette). With his new position he believed he could advocate his true views. He criticized the party for the "lowering of literary and professional standards" by strict political control. He was charged with revolting against Marxism, disobeying the party's orders, treating "Wenyibao" as his own property and surrendering to bourgeois ideas. 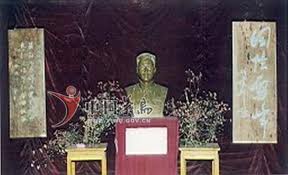 Results of Incident: Feng pleaded guilty to all of the charges and promised to reform, however, he was demoted. During Mao Zedong's "Hundred Flowers" policy in 1956, literary control mitigated slightly and Feng began to speak out again. During the Anti-Rightist Campaign in 1957 he was accused of opposing the party and sent for reform through labor. He spent the last years of his life performing manual labor during the Cultural Revolution. However, he is now highly regarded in the People's Republic of China.