Fountain of the Pioneers (public art) 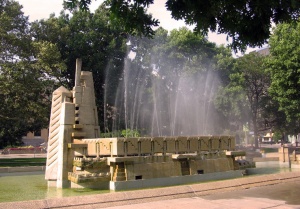 Description of Artwork: Fountain of the Pioneers is an Art Deco-style monumental public sculpture designed by the Italian-American Modernist artist and designer Alfonso Iannelli for the City of Kalamazoo in the late 1930s. The sculpture incorporates a reflecting pool and the figure of a “Pioneer” face-to-face with an “Indian". Art historians claim that the artwork represents Native American resistance to westward expansion

In 2016, it was listed as a nationally significant work in the National Register of Historic Places (NRHP).

The Incident: At a meeting of the City Commission in October 2017, a group of protestors argued that the artwork is an expression of white supremacist hate and oppression, despite the claim of an anti-westward expansion message of Iannelli’s work. The historic expulsion of indigenous peoples from Kalamazoo incited objections to the work. On March 6, the Kalamazoo City Commission voted 5-1 to remove Fountain of the Pioneers.

NCAC opposed the swiftness of Kalamazoo’s decision as well as their hasty response to emotional complaints. The organization asserted that such works of art should not be confused with those that were historically intended to send a clear racist message such as Confederate monuments. They advised the City Commission through a letter to carefully consider the factors involved in the creation, installation and retention of a piece of public art.

Results of Incident: The City Commission chose to follow through with their decision and work to remove the fountain began in April 2018.

Work to remove Fountain of the Pioneers starts this week, Kalamazoo News, April 24, 2018.