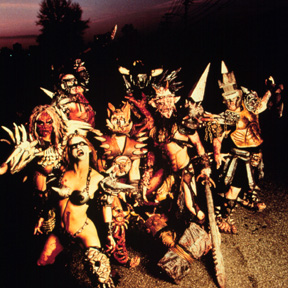 Description of Artwork: GWAR's skits and props include a phallic-shaped fish that shoots liquid into the audience, and a skit in which mannequins are dismembered and fake blood sprayed at the crowd.

The Incident: The band performed at the Georgia Theater in Athens on May 15, 1992 and was shut down by police. Athens police charged the theater's owner with violating the county's alcoholic beverage code, which forbids facilities form presenting "licentious or obscene" performances when liquor is served.

Results of Incident: The Georgia ACLU represented the band and members of the audience and received a settlement of $17,500.