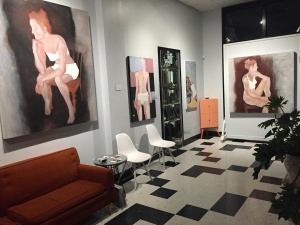 Description of Artwork: Nicole Touchet launched Galerie Touchet in downtown Lafayette, Louisiana to showcase the work of emerging local artists, including herself. For the annual March ArtWalk, Touchet mounted a solo exhibition of her own paintings: large-scale nude self-portraits.

The Incident: After the show opened, Touchet received an email from Property One, Inc., the building management company, demanding that she remove her work: “You have to take down the nude pictures you have in your gallery. Part of the agreement to rent you the space was to not display nude pictures.” Instead of removing her work, Touchet covered the nudes up with cut-out newspaper bikinis, then posted a sign on the front window: “Censored by Management.”

Results of Incident: The artists and small businesses of Lafayette rallied around the cause of freedom of expression with a city-wide Nude ArtWalk and 'Free the Nipple' campaign. Touchet closed her gallery once the lease was up and moved to New Orleans.

NCAC Statement: The Human Body is Not an Object of Shame: The National Coalition Against Censorship Salutes Nude ArtWalk