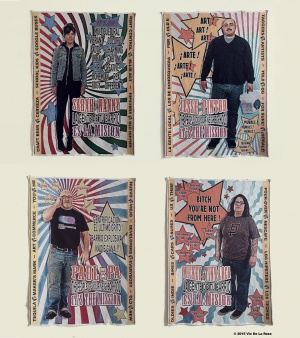 De la Rosa solicited stories from Mission residents and included conversations heard locally. One panel features a photo of resident Micky "Tiny Loca" Martinez, quoting from a story she told the artist, which included the words "Bitch, you're not from here!". Every panel has keywords reflecting views of life in the Mission, such as "Vibrant" or "Art!" or "forced out," and a border consisting of pairs of words such as "Us Vs. Them," "Pour-Over Vs. Nescafe," or "YOLO VS. OG."

The Incident: Commissioned by the City of San Francisco in February 2015 to create artwork about the Mission neighborhood, De la Rosa's panels were intended to be placed in the plaza of the Bay Area Rapid Transit (BART) 16th St. station in September 2015.

BART rejected the "Tiny Loca" panel due to the use of the word "bitch" and "overall demeaning message." The agency, which is still developing a public art policy, allegedly applied its advertising policy when evaluating the work.

Results of Incident: BART offered to feature the other three panels. De la Rosa viewed the fourth panel as integral to the work and refused. In late October, in a guerilla action, De la Rosa and supporters placed copies of the panels on the plaza display cases at the 16th St. station and spoke with local residents about the work.

On December 4, 2015, the American Civil Liberties Union of Northern California and the National Coalition Against Censorship submitted an open letter to BART, arguing that the refusal to place one of the four panels of La Gente De Tu Barrio because some official may have subjectively found it "demeaning" was viewpoint discrimination and violated the First Amendment.

As of December 2015, La Gente De Tu Barrio / The People of Your Neighborhood [The Mission Suite] has not been placed in the plaza of the San Francisco 16th St. BART station.