Difference between revisions of "George Carlin" 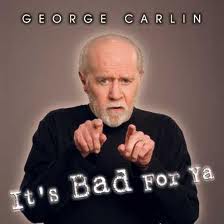 Description of Artwork: The comedian George Carlin in a 12 minute long monologue aired on Pacifica radio used in his own words; "the words you couldn¹t say on the public, uh, airwaves, um those ones you wouldn¹t say ever." In his monologue he repeated, analyzed and discussed words banned from the airwaves by the FCC the words were: shit, piss, fuck, cunt, cocksucker, motherfucker, tits, fart, turd, cock, ass, and twat.

The Incident: The FCC applied its own regulations concerning indecency and obscenity to prevent any "obscene, indecent, or profane language by means of radio communications." The FCC imposed sanctions on Pacifica. The radio station in turn protested to the courts that the words, and the monologue, were constitutionally protected. In 1978 the Supreme Court said it was okay for the FCC to punish Pacifica for broadcasting the seven dirty words during a time when children were likely to be in the audience.

Results of Incident: "..In disciplining Pacifica, the FCC relied on a definition of indecency as "language that describes, in terms patently offensive as measured by contemporary community standards for the broadcast of the medium, sexual or excretory activities or organs." With only minor changes this is still the government's indecency standard: its definition of material that broadcasters must channel to a "safe harbor" nighttime period when it is likely that children will be listening." (Sex, Sin , and Blasphemy, Marjorie Heins, pg. 26)