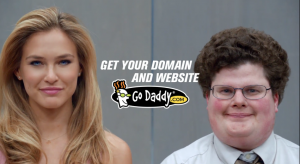 Description of Artwork: In this ad for GoDaddy, a internet domain registrar and web hosting company, Israeli supermodel Bar Refaeli and Jesse Heiman, playing a nerd, are sitting in a room. She is wearing a pink cocktail dress and he a collared shirt and tie. The narrator says that there is sexy side to GoDaddy, represented by Refaeli, and a smart side, shown by Heiman. As Refaeli and Heiman look into each other's eyes, the narrator says, "Together, they're perfect." Refaeli and Heiman move in closer and closer and they begin to kiss. This ad was part of GoDaddy's "Smart Meets Sexy" campaign.

The Incident: This ad was censored by CBS because the kiss scene between Refaeli and Heiman contained too much tongue for television. CBS rejected the original version of the ad because it was "indecent" and ran an edited version with less passion and less tongue.

Results of Incident: The original ad was rejected, but CBS ran the edited version during the Super Bowl. GoDaddy capitalized on the free press that this censorship brought, and ended up posting the original version on their website.