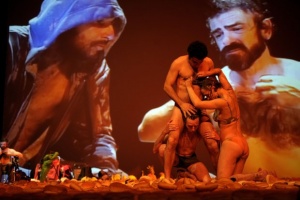 Description of Artwork: Rodrigo Garcia's play Golgota Picnic is a critique of modern day consumerism through a deconstruction of the message of Jesus.

The Incident: Golgota Picnic was scheduled to be performed at the Poznań Malta Festival on June 26th and 27th. The festival organizers canceled the performance because of threats of violent protest and riots from religious and far-right groups.

On July 2, 2014, Conservative Law and Justice (PiS) Member's of Parliament, Małgorzata Sadurska and Andrzej Jaworski, filed a motion with the prosecutor's office ensuring that the play would not be performed anywhere in Poland. The motion claimed that the play "offends religious sentiment" and describes the play as “pseudo-art, full of scenes of obscenity, profanity and pornography."

MP's, Sadurska and Jaworski, claim that the staging of the play contravenes Article 196 of the Criminal Code, which states that, "anyone who offends the religious feelings of other people [can be] subject to a fine, restriction of liberty or imprisonment for up to two years."

Results of Incident: The play was not performed at the festival. The motion to ban the play entirely in Poland is still in progress. A group of artists, led by film director Agnieszka Holland have written a letter to President Komorowski demanding that artistic freedom be respected in Poland.