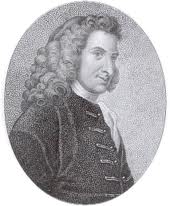 Description of Artwork: Fielding wrote many controversial plays that offended the British nobles and royalty. His plays The Welsh Opera and The Grub Street Opera, satirically portrayed "a henpecked King George II, a self-importantly religious Queen Caroline and an impotent, lecherous Prince of Wales."

The Incident: Fielding challenged the limits of free expression under the government of Prime Minister Walpole throughout his career as a playwright. The Welsh Opera was successful and Fielding decided to expand the play under the title The Grub Street Opera. Walpole became aware and Fielding withdrew the play. In 1736 Fielding attacked Walpole in his plays The Craftsman, Pasquin, and Eurydice Hissed. In addition, his play The Golden Rump was said to be a viscious attack on the royal family. Walpole began to mobilize the conservative Whigs in Parliament to consider a law limiting theater licenses.

Results of Incident: The Theater Act was passed in 1737. It limited the number of theaters in London to merely two. Fielding ceased writing plays, took up the legal profession and wrote the novel Joseph Andrew.