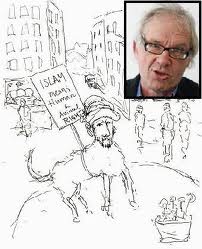 Description of Artwork: The pieces in question are three sketchy drawings depicting Mohammed as a dog. Another drawing by Vilks has Mohammed and Hans Christian Andersen visiting the Carlsberg brewery in Copenhagen.

The Incident: A few hours after the opening of the exhibit entitled The Dog in Art, the organizers noticed the drawings and took them down. Exhibition organizer Märta Wennerström explained that they were worried that portraying Mohammed as dog would offend Muslim visitors and that although they are not proud of the decision, believed it needed to be done as she was complained to.

Results of Incident: The pictures were taken down to avoid an uproar.

The Orebro (Sweeden) newspaper Nerikes Allehanda published the drawings as part of an Aug 19, 2007 editorial criticizing several Sweedish art galleries for refusing to display a series of prophet drawings by Vilks. In response, Muslims stage a demonstration and demanded the editor apologize and never publish a similar image. The editor refuses to do that.