From Censorpedia
Revision as of 16:04, 2 December 2011 by JonathanF (talk | contribs)
(diff) ← Older revision | Latest revision (diff) | Newer revision → (diff)
Jump to navigation Jump to search
The printable version is no longer supported and may have rendering errors. Please update your browser bookmarks and please use the default browser print function instead. 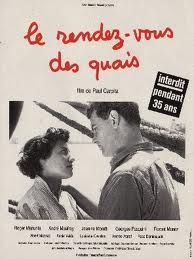 Description of Artwork: The subject is explosive: in 1950, with the background of a docker's strike, protesting against the Indochinese War, the film exposes the difficulties of a young worker who is looking for an apartment to rent. The hero will not hesitate to betray his class, to become a "yellow," until a revolutionary illumination opens his eyes.

The Incident: The film is released in several film theatres of Marseille. After several screenings, the police arrive, take hold of the prints and put them under sequestration.

Results of Incident: In 1988: by miracle the impounded prints are found. Le Rendez-vous des quais is screened at the French Cinematheque in the program Ecrans de la liberte.