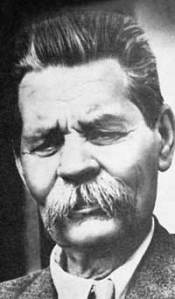 Description of Artwork: Maksim Gor'kii's work earned him the title as the founder of "socialist realism" literature from Lenin and Stalin. His vagrant life as an orphan and his experiences in the Russian intellectual scene are documented in his three-part autobiography. Among his earlier works are two books of short stories that made him famous in his country. Most of his books were commentaries on the turbulent Russian political landscape of his time, whether they were fiction or non-fiction, including Song of the Stormy Petrel (1901), The Lower Depths (1902), The Confession (1908), and Untimely Thoughts (1917).

The Incident: In 1901 Song of the Stormy Petrel was censored for being seditious. The following year he was elected to the Russian Academy of Sciences and Letters, only for his election to be annulled on the orders of emperor Nicholas II. Korolenko and Chekhov resigned in protest.

During the first Russian revolution from 1905-1906 Gor'kii was arrested and imprisoned and his work was censored and restricted. For five years Gor'kii lived in exile in Italy.

The Confession (1908) was Gor'kii's attempt to found a new popular religion, reconciling socialism and Christianity. This earned the disapproval of Lenin and the Bolsheviks and later was censored for being politically incorrect.

When Gor'kii returned in 1913 he began to criticize the Bolsheviks for their increasingly dictatorial policies. Gor'kii's opposition to the trial and execution of political opponents led the Bolsheviks to close his publishing house and journal New Times. After this Gor'kii again went into exile in Italy, this time for ten years. During this time he continued his criticism of Bolshevik censorship, especially the campaign led by Lenin's wife to purge libraries of anti-Soviet works.

In 1931 Gor'kii returned to the Soviet Union on the request of Stalin, who saw the propaganda potential in having Gor'kii in Russia. There were large celebrations upon his return and he was named the chairman of the Writer's Union, hailed as the pioneer of socialist realism, and his novel Mother was given as the ideal socialist realism work. In order to maintain this cozy relationship with Stalin, Gor'kii became a willing practitioner of self-censorship. Two articles he wrote for the publication News attacked Soviet journalists who wrote negative things about the government, saying they were only comforting the "enemies of socialism".

Results of Incident: This self-censorship practiced by Gor'kii called into question his legacy as a writer against censorship. Gor'kii died under somewhat mysterious circumstances in 1936, partly due to health complications resulting from a suicide attempt when he was young. Although most believe the death was natural Stalin used it as a pretext for the arrest and execution of the head of the Soviet secret police.