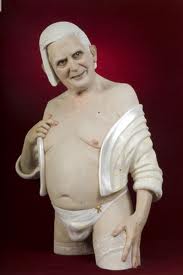 Description of Artwork: Miss Kitty, the most controversial piece and the first to be pulled, features Pope Benedict in drag. This statue displays him wearing nothing more than stockings and panties. It was originally called "Josephine" after the pope's birth name (Joseph), but changed upon request of the event organizers.

For the most part, however, the show made efforts to avoid controversy. There was no explicit sexuality according to the few who were able to see it.

The Incident: The show had been delayed due to concerns about offending Catholics. While open to select politicians and journalists, it was never opened to the public. Mayor Letizia Moratti ordered that two pieces (Miss Kitty and another which places Jesus Christ in a famous photo of a transgender prostitute) be removed. Organizers agreed to this, but when the mayor decided to cut 10 more pieces and limit access to those over 18 years of age, they decided to cancel the show.

Results of Incident: Milan Culture Councillor Vittorio Sgarbi said that it would be better to cancel the show and move it to another city than to accept such a watered down version. Newspapers reported that there was a lack of homosexuality in the exhibit after the censorship. It was never opened to the public.