My Name Is Rachel Corrie (play) 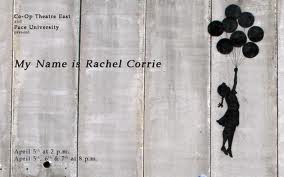 Description of Artwork: The play, My Name Is Rachel Corrie, which debuted in London, is a solo show about American peace activist Rachel Corrie, who was killed by an Israeli bulldozer while trying to stop the demolition of a Palestinian home.

The Incident: Mr. Nicola stated that the performance would be "delayed" because of fears that it would upset the community, and touch on sensitive political and religious issues which have become even more sensitive in the wake of Ariel Sharon's illness and the majority victory of Hamas in recent democratic elections.