Paradise Lost (and other works by Milton) 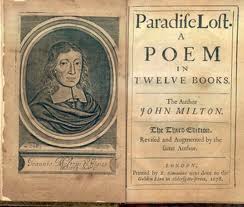 Description of Artwork: Areopagitica, A Speech for the Liberty of Unlicenc'd Printing, to the Parliament of England, 1644: a call on the astronomer Galileo who was in semi-captivity because of the Roman Church. A famed eloquent plea for freedom of the pen. Eikonoklastes, 1649: self portrait of the Royal Saint Martyr, catching the public in its first shock of horror over the execution of Charles I, was one of the most potent pieces of propaganda in English history. Pro Populo Anglicano Defensio, 1651. Paradise Lost, 1667: prose, denial of predestination in the theological sense. Milton speaks of "patience and heroic martyrdom" as themes unsung though nobler than martial prowess. State Papers, 1676.

The Incident: Shortly after Caxton set up his press in Westminster in 1476, the crown forbade all printing except by Royal permission. This prelicensing continued for nearly 200 years, eventually calling forth the Areopagitica, A Speech for the Liberty of Unlicence'd Printing, to the Parliament of England in 1644. Areopagitica... was delivered before parliament and was published without license in defiance of a restraining ordinance. 1652 in France Pro Populo Anglicano Defensio was written as a reply to the attack on the Commonwealth of Salmasius and was burned for political reasons. 1660 in England Eikonoklastes was burned by the common hangman at the time of Restoration for attacking the hypocrisy of the religion of Charles I, and for arguing against the divine right of kings.

Results of Incident: 1644, England: Areopagitica, A Speech for the Liberty of Unlicence'd Printing, to the Parliament of England was condemned by Cromwell and the Parliament of Protestant England for such sentences as this: "And yet on the other hand unless wariness be used, as good almost kill a man as kill a good Booke... who destroys a good Booke, kills Reason itself, kills the Image of God as it were in the eye." 1660, England: Pro Populo Anglicano Defensio was publicly burned. In the case of Eikonoklastes the author escaped the scaffold only through the influence of friends.