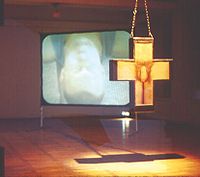 Description of Artwork: The installation entitled Passion, consists of a mute video in slow motion of a man lifting weights and a pendant cross hung nearby covered with a photograph of male genitals. The piece deals with masculinity and the masochistic male suffering in order to gain strength

The Incident: The piece was displayed in the experimental twenty-year-old Wyspa Gallery in Gdansk. Notoriety was created regarding the piece after it was aired on television, neither exhibiting the entire piece, nor giving the viewing audience an explanation of the artist’s intention. Members of the right-wing League of Polish Families saw the clip, lodged a complaint on religious grounds and mounted a campaign against the piece. Activists raided the gallery where her work was being shown and the All-Polish Youth, the League of Polish Families' skinhead militia, threatened to shave Nieznalska's head (as was done with women who were believed to have had relations with Nazis). Political uproar ensued and Nieznalska was brought into court, accused of violating article 196 of the Polish penal code, which protects religious feelings. Also of note, the Polish constitution affords it's citizenry the right to free expression.

Results of Incident: Due to the exhibition, the court ordered the distinguished Wypsa Gallery to be closed. Further, Nieznalska was sentenced to six months community service, with concurrent restriction of creative expression, and was ordered to pay the trial fees. Nieznalska is fighting the decision and seeking an appellate review. Further, the Wyspa Progress Foundation is campaigning to overturn the verdict through circulating petitions, and applying political pressure to uphold the Polish constitution right to free expression.