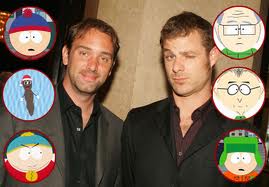 Description of Artwork: 201 was the second part of a two part episode of South Park. While subplots ran rampant throughout the episode, one particular story involved the Super Best Friends, a group comprised of religious figures with superpowers. Muhammad was to be depicted within the group. 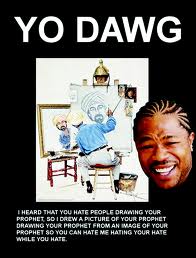 The Incident: In the first part, Muhammad was dressed up in a bear suit. In response, an Islamic religious group called Revolution Islam issued a statement online saying that the creators of the show should tread carefully about showing the prophet onscreen because the murder of Theo Van Gogh in 2004 could happen to them as well. Because of the posting, Comedy Central decided to censor 201. When the final cut was streamed to Comedy Central from the show's production facility, the network put a large black rectangle in front of any depiction of Muhammad that said "Censored." They also beeped out any audio reference made, ultimately resulting in beeping out a 2 minute speech that outlined the story's moral conclusion.

Results of Incident: The episode aired censored. There were numerous responses to the episode. Jon Stewart launched a tirade on air against Comedy Central, saying that it is the network's right to take precautions to safeguard their employees but then showed numerous religious jokes made on The Daily Show. A Facebook group was created to establish "Everybody Draw Muhammad Day" on May 20.