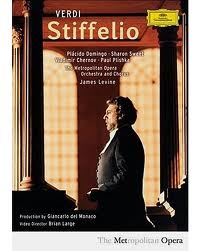 Description of Artwork: Stiffelio is an opera about "a contemporary Protestant minister in Salzburg whose non-violent beliefs are shaken by his wife's infidelity." Within the course of the narrative "the preacher, searching for a sermon subject, hits on Christ's defense of the woman about to be stoned for adultery." ('Let he among you who is without sin cast the first stone.')

The Incident: Due to the staunch Catholic population of 1850's Italy, portraying a Protestant minister in a positive light (who is married as opposed to Catholic Priests who are not) and the historical policy which prohibited a church service on stage, Stiffelio was considered completely inappropriate and was banned after the first performance. In 1857 Verdi transformed the opera into Aroldo, "with the hero a returning English crusader, not a man of peace, but of war, the blood of countless infidels staining his sword."

Results of Incident: Stiffelio (its original score) was successfully buried during Verdi's lifetime and its existence remained unknown until 1968 when two copyists manuscripts were discovered in the Naples library, Biblioteca Di San Pietro a Majella. Since that time several Verdi scholars lead the search to recover the entire original version of Stiffelio, with the Verdi family's consent to access Verdi's Sant' Agata estate, where they found a near complete conductor's score. Speculative productions in the 1970s preceded a definitive score produced by Kathleen Kuzmick Hansell of the University of Chicago. The first complete performance of the new score was given on 21 October 1993 at the Metropolitan Opera house in New York.