Difference between revisions of "Tarzan and His Mate" 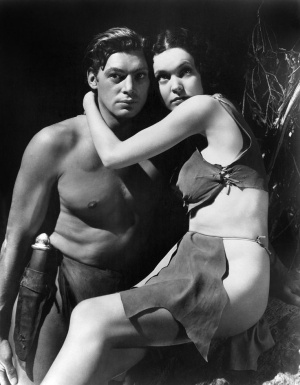 Description of Artwork: Tarzan and His Mate is the 1934 sequel to Tarzan The Ape Man, starring Johnny Weissmuller and Maureen O'Sullivan. In the film, Tarzan and Jane are now living together in the jungle, when men looking for ivory try to convince Jane to return to civilization with them. Jane finally agrees only after she is led to believe (falsely) that Tarzan has been killed.

The Incident: The film contains many "scandalous" scenes, the most famous of which is a nude swim with Tarzan and Jane.

Results of Incident: Three versions of the swim sequence eventually went out to separate territories during the film's initial release. One with Jane clothed in her jungle loincloth outfit, one with her topless, and one with her in the nude. However, by April 24, 1934, all prints of Tarzan and His Mate in all territories were ordered changed and the swimming sequence cut.