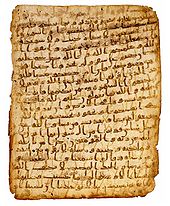 Description of Artwork: The Koran: The Holy book of Islam regarded by Muslim as the true world of God that was revealed to the prophet Muhammad and collected in book form after his death. It is accepted as the earthly reproduction of an uncreated and heavenly original and is held in high esteem as the ultimate authority in all matters legal and religious.

The Incident: 1542 Switzerland: Protestant authorities at Basel confiscated the entire edition published by Oporinus, who promptly appealed to scholars. 1926 Soviet Union : Official directions to libraries stated "The section on religion must obtain solely anti-religious books. Religiously dogmatic books such as the Gospel, the Koran, the Talmud, etc. must be left in the large libraries, but removed from smaller ones."

Results of Incident: The Koran remained banned throughout Europe until the modern period; it was placed on the Index; it was not widely available in the Soviet Union until it's demise in 1992.