Difference between revisions of "The Pose (sculpture)" 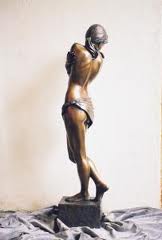 Description of Artwork: Hallier's, The Pose, is a life-sized bronze sculpture of a woman in a stringy black dress sitting on a bar stool with one breast and her genitals exposed. (The photo at right is of a different work, but shows Hallier's realistic style and form.)

The Incident: The Artworks Gallery, Inc., invited Hallier to exhibit his sculpture in the lobby outside of the organization's gallery, which they share with an Army and Air Force recruiting center. Parents of enlistees requested that the recruiters cover or remove the sculpture. A senior military official contacted Judith Green, the executive director of the Artworks Gallery, and demanded that she remove the piece.

Results of Incident: Green and the Connecticut Sculptors' Guild director, Arnold Austad, insisted that the piece stay until the end of its exhibit. Since complaints continued, Green and Austad moved the sculpture to a basement cafe.