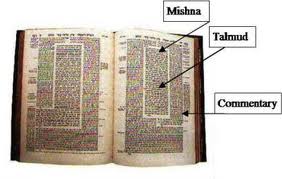 Description of Artwork: The Talmud and Midrash in Judaism, commentaries and interpretive writings second in authority only to the Torah. The term 'Talmud' commonly refers to a compilation consisting of the Mishana (oral laws supplementing spiritual laws), the Gemara; and certain auxillary materials. For most scholars, however, 'Talmud' in the precise sense refers only to the materials customarily called Gemara, the commentary on Mishana.

The Incident: 1190 Egypt-Cairo: With his Guide for the Perplexed, Maimonides, the Jewish philosopher, aroused the Christian's resentment. 1244 France-Paris: Talmud burned on charges of blasphemy and immorality. The book was persecuted in various places for another 100 years. 1244 Italy-Rome: Pope Clement IV appointed a committee of censors who expunged all passages that appeared derogatory of Christianity. (Talmudic references to ancient paganism were widely misrepresented as criticism of the Church.) 1926 Soviet Union: Official directions to libraries stated "The section on religion must obtain solely anti-religious books. Religiously dogmatic books such as the Gospel, the Koran, the Talmud, etc. must be left in the large libraries, but removed from smaller ones².

Results of Incident: 1190 Egypt-Cairo: First official burning of Hebrew books by orders of Dominicans, Franciscans, and others. 1490 Spain-Salamanca: In an auto-da-fé, thousands of Hebrew books including biblical texts were burned by order of the Inquisition. 1926 Soviet Union: virtually no printing of the work since then.