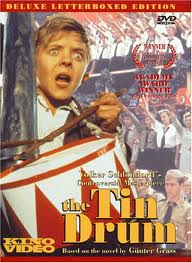 Description of Artwork: The 1979 widely acclaimed film is about a young boy who, during the rise and fall of Nazism in Danzig, Germany, refuses to grow and assume adult responsibility. The scene causing the controversy depicts the boy briefly performing oral sex on a teenage girl.

The Incident: "Oklahomans for Children and Families" (OCAF), an "antipornography" group that claimed over 13,000 members, brought the film to the attention of the prosecutor. Judge Freeman reviewed the controversial scene and declared that the film was obscene under Oklahoma law. Police then removed the film from at least one private home, six video stores and took possession of the film that had been borrowed from a library.

Results of Incident: Several lawsuits ensued. The Video Software Dealers Association filed suit, claiming that the seizures violated First Amendment rights, Fourth Amendment rights prohibiting unlawful search and seizure, and the federal Video Privacy Protection Act, which limits the circumstances under which video retailers may be forced to divulge who has rented a film. The American Civil Liberties Union of Oklahoma filed a similar suit on behalf of the individual from whose home the video was taken. The district attorney's office filed suit in state court against Blockbuster and Hollywood video stores and the Metropolitan Library System. The suit asked the court to determine whether The Tin Drum is obscene and, if so, to enjoin the defendants from further distribution or rental. Ultimately, U.S. District Judge Ralph Thompson overturned Freeman's ruling, saying the film is a work of art protected under state and federal law. He ruled that Oklahoma City police unconstitutionally confiscated the film copies and that the videos must be returned to their rightful owners. The other law suits? Can't find the verdicts