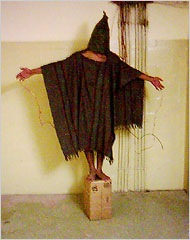 Description of Artwork: Specialist Sabrina Harman served in the army in 2003 when the U.S. invaded Iraq. During her time served Specialist Harman took thousands of photographs that showed the abuse suffered by the prisoners in the Abu Ghraib prison in Baghdad, Iraq.

Some photographs show soldiers pointing their guns at the heads of handcuffed prisoners. Some show prisoners naked and handcuffed with sandbags over their heads. The most iconic photograph from the set is a photo of a prisoner who was hooded and had a poncho. The man is standing on a box with his arms outstretched and wires tied to his fingertips. The story behind this is that the man was made to stand on the box with his arms outstretched for hours. The had wires tied to his fingertips and was told that if he moved he would be electrocuted. Other photographs include a naked prisoner being dragged by a leash around his neck, prisoners being forced to sodomize themselves with bananas, and a psychologically disturbed man standing with his legs crossed and arms outstretched covered from head to feet in feces.

The Incident: In 2004, it was discovered that the prisioners at the Abu Ghraib prison in Iraq were being tortured by American soldiers. Specialist Sabrina Herman was a solider at that time who participated in abusing the prisoners. At first she saw the abuse as harmless but after a while she began to see the psychological manifestations of the abuse. At this point she decided to act as an outsider- not contributing to the abuse but not stopping it either. Instead she took photographs of the things she saw. She claims that she took photographs because she knew just her verbal account of the abuse would be unbelievable.

Results of Incident: The Bush administration censored the photographs. When campaigning for presidency, President Barack Obama promised the release of the Abu Ghraib photographs. Upon entering office, he has then reversed his decision. President Obama cites that releasing the photographs would "further inflame anti-American opinion." In 2004, the American Civil Liberties Union filed a lawsuit asking that the photographs from Abu Ghraib be released. On March 20, 2015, a federal judge ruled that the United States government must release the remaining photographs that show the abuse in the Abu Ghraib prison. The Defense Department has 60 days to appeal.