What Is The Proper Way To Display A U.S. Flag? 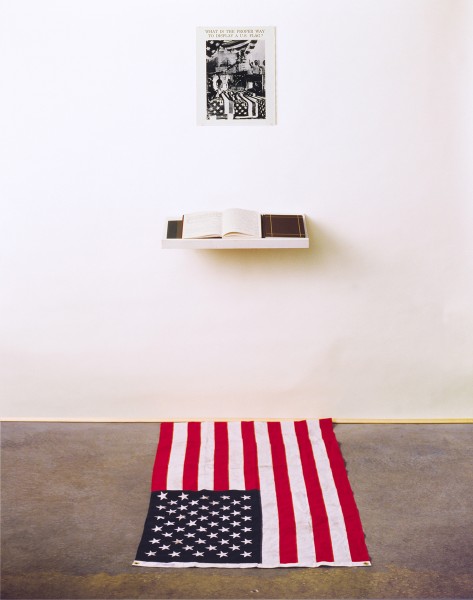 Description of Artwork: What Is The Proper Way To Display A U.S. Flag? is an installation by "Dread" Scott Tyler. The piece is constructed so that on the gallery wall appears the title with a photograph depicting images of the flag. Below the photograph is a book on a shelf. On the floor, directly beneath the shelf is the United States flag spread neatly with the width against the wall and the length extended out towards the viewer.

The Incident: Dread Scott Tyler's work was part of a minority student exhibition at The School of The Art Institute of Chicago entitled A / Part of The Whole. After requests by school administration for Tyler to withdraw the piece, What Is The Proper Way To Display A U.S. Flag? was reluctantly included in the juried show. Within a week of the exhibition's opening on February 17, 1989 protests and threats arose. The press, alerted to the fact of a flag on the floor that viewers were stepping on, came in with minicams. An attack on the institute was orchestrated by Republican senator Walter Dudycz, along with representatives from veterans' organizations, including the Veterans of Foreign Wars, the American Legion, and Viet-Now, who filed a suit in Cook County Circuit Court to close down the show. On March 2, Tony Jones, president of the School of The Art Institute, stood in court before Judge Kenneth Gillis as he readily dismissed the suit. Gillis ruled that the institute had not violated either state or federal laws concerning the flag. "This exhibit is as much an invitation to think about the flag as it is an invitation to step on it," Judge Gillis said reminding the court works of art are protected under the First Amendment. This ruling had little affect on the protesters outside of the school.

Amidst numerous bomb threats and physical threats to students,faculty, staff and visitors to the school, Security was fortified with plain clothes police, and visitors to the gallery were restricted to eight people when it was not necessary to clothes the gallery due to threats. The school stood by the artwork for the duration of the show. Senator Dudycz arrived in the gallery one day with a bucket of sand and a pole and hung the flag.

Chicago Police Department informed the school that they were not criminally liable for the piece, but any viewer who walks on the flag may be charged with a felony. A teacher, visiting Chicago, walked on the flag in order to write in the book was arrested when police were alerted by a veteran.

Results of Incident: The exhibition remained in the gallery for its scheduled duration, but Tyler was not allowed to submit What Is The Proper Way To Display A U.S. Flag? for his thesis project in the schools graduation show. The School of The Art Institute of Chicago's government funding was cut from $70,000 to $1 and many benefactors pulled donations.