A Conference about the Next Succession to the Crown of England 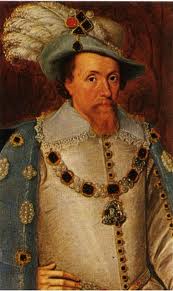 Description of Artwork: The intention of A Conference about the Next Succession to the Crown of England was to support the title of the (Catholic) daughter of King Philip II of Spain, the Infanta Isabella Clara Eugenia (pictured below, left) against that of (the Protestant) James VI of Scotland (pictured at right), after the death of Queen Elizabeth. The authors are believed to be Robert Parsons the Jesuit (pictured above, left), Cardinal Allen and Sir Francis Englefield, although some scholars believe that Parsons was the sole author. 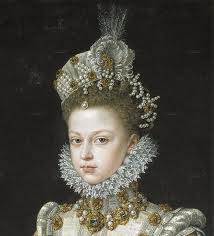 The Incident: At the accession of James in 1603, A Conference about the Next Succession to the Crown of England was rigorously suppressed by Parliament, unsurprisingly, which enacted that "whosoever should be found to have it in their house should be guilty of high treason."

Results of Incident: The printer is said to have been hanged, drawn, and quartered. Parsons was, wisely, on the continent, where he spent the rest of his life, a devoted Roman Catholic.