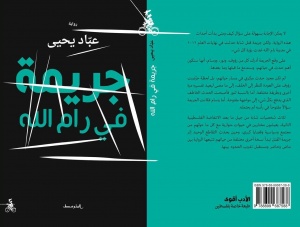 Description of Artwork: Crime in Ramallah is the fourth book by novelist Abbad Yahya. It follows the lives of three young Palestinian men, one of whom is gay, caught up in the murder of a young woman in the city of Ramallah.

Since the launch of the AG’s investigation, Yahya has been the victim of a hate campaign on social media, receiving death threats; copies of his novel were reportedly burnt in the Gaza strip.

Results of Incident: Abbad Yahya remained in Qatar following the confiscation of his book, as he feared that he would be arrested if he returned home. English PEN released a statement supporting the author, pointing out the problematic censoring actions of the Palestinian government. In addition to this statement, The department of culture and information of the Palestine Liberation Organization also condemned the actions of the Attorney General's office, saying that it "opens the door for an endless censorship, which violates freedom of expression and right to creative writing."

A book club in the West Bank city of Nablus canceled a public discussion on Crime in Ramallah after its members received anonymous death threats.

Hamas also condemned the novel, and the head of the Palestinian writers' union criticized it. However, prominent Palestinian intellectuals have demanded that the ban be rescinded.

Facing Death Threats And A Ban On His Novel, A Palestinian Author Flees, NPR, April 1, 2017