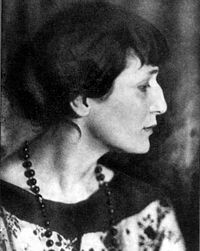 Description of Artwork: Some of Akhmatova's poetry was considered anti-revolutionary. She also sent letters to Stalin requesting the release of her son from prison camp, in addition to several epic poems and plays.

The Incident: Akhmatova had been censored by Soviet authorities throughout her life. Her first husband was executed for his alleged involvement in an anti-revolutionary plot. She blamed his death and her son Lev's imprisonment partly on her poetry. In the 1920s, a two volume collection of her work was planned, however critics were able to prevent its production. In the 1940s another attempt was made to publish a collection of her work; this time, Stalin took offense to her poem, "Slander," and blocked its publication.

Results of Incident: In 1946, Akhmatova was expelled from the Union of Soviet Writers. She was known to share many of her poems with only her close friends, who scribbled her work onto scraps of paper, memorized her words and burned them. Akhmatova was also known to incinerate her own work. The censorship of her work was not lifted until the Soviet period of glasnost, when the government introduced cultural and literary freedom.