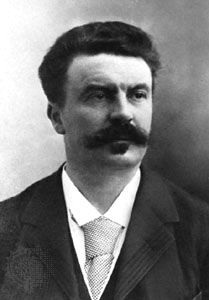 Confronting Bodies: The Office of the Public Prosecuter of Étampes

Location: Étampes, a community just outside of Paris, France

Description of Artwork: The poem, Au Bord de l'eau (The Water's Edge) is a tale of a love affair between an oarsman and a washerwoman who destroy themselves in pursuit of sex. Maupassant himself considers it "completely immoral and indecent in images and subject matter."

The Incident: The poem was published in Paris in 1876. However, it was not until 1879 that The Office of the Public Prosecutor of Étampes filed charges against Maupassant and his publisher for the offensive piece.

Maupassant was less worried about incarceration than he was about losing his position and livelihood at the Ministry of Education. He asked his friend, Gustave Flaubert, a respected French author, to write a letter in his defense and get it published. In this letter, Flaubert asks why Étampes should have the poem banned while it is allowed to be published in Paris, claiming that justice in the provinces should be no different than justice in Paris. Furthermore, he states that if the authorities were to have their way and command a "monopoly of taste," great artists such as Shakespeare and Voltaire would never flourish.

Results of Incident: The charges against Maupassant were dropped due to Flaubert's defense and a lack of evidence. Afterwards, Maupassant continued to protest censorship, even when the case was not directly aimed towards him. He became a firm believer that works of art should not be subject to change for failing to follow the standards of popular writing aimed at the general public.