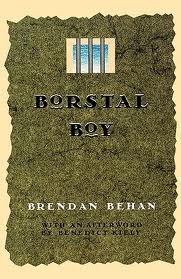 Description of Artwork: Behan's autobiographical novel, Borstal Boy tells the story of a 16-year-old boy who is arrested and charged with membership in the Irish Republican Army. The book describes the boy's experience with other inmates, discussing sex, religion and politics.

The Incident: Behan was well-known for his plays before Borstal Boy was banned in Ireland in 1958. It is believed that the Irish Censorship of Publications Board rejected the novel because of its treatment of adolescent sexuality, questionable language, and critiques of Irish republicanism, social attitudes and the Catholic Church. Behan affronts the Irish Republic's religious conservativism and how it affects the nation. The censorship board, however, was never required to explain its decision.

Results of Incident: Borstal Boy was banned in Ireland in 1958 and in Australia and New Zealand shortly after. Behan released several other works, mainly plays, because the Censorship of Publications Board had no jurisdiction over theater. He continued to criticize fanatical Irish Republicans.