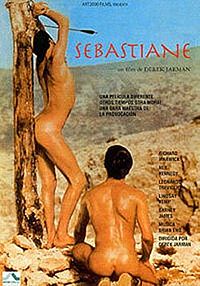 Description of Artwork: Jarman created numerous homosexual films from the 1970's through his death in 1994. In addition to the topic of homosexuality, the movies sometimes contained full nudity and violence.

The Incident: The first of his censored films was Sebastiane, which is about an early Christian saint. A homoerotic story emerges between two Roman soldiers and one scene includes a penis swinging into the frame. For the cinema, censors decided to project the film the wrong ratio to obscure the penis. The television rights were acquired early on, but it was never shown.

This was not the last time his films were cut by television stations. In 1978, his film Jubilee, caused an outrage over its showing violence against police. The prompted the station to place a red triangle in the corner of the screen to warn the public that a program might be offensive, but instead the triangle enticed more people to watch.

In 1988, a small portion of Edward II was cut by the BCC. Jarman demanded that during the cut a banner saying, "Censored by the BBC" would go up, but he had no legal right to insist on this.

Nearly all of Jarman's works saw cuts or resistance of some sort in an attempt to de-homosexualize them.