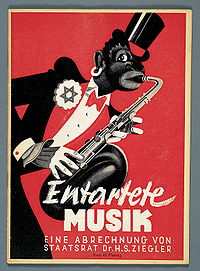 The Incident: In 1933 the attack on music began with the Civil Service Restoration Act which allowed the authorities to dismiss any non-Aryan or politically suspect musician who was employed wither as a teacher at State Music Conservatory or as a performer in an opera house or music hall. Within the first months of Nazi rule many prominent musicians left Germany, including Schoenberg. The Nazis then seized control of the national broadcasting system and jazz was banned from the airwaves. A telegram sent from American musicians to Hitler in protest of this act led to the boycott of their recordings as well. Music critics and journalists who sympathized with modernism were also removed from their jobs. In November of that same year the Reich Chamber of Music was introduced. If you wanted to make a living as a musician you had to obtain membership to this group.

In 1937 after charges of having a degenerate repertoire, Goebbels shut down the Allgemeine Deutsche Musikverein music festival and established in its place the Reichmusiktage. During this time censorship of music intensified and local music organizers were assigned to monitor music in every town.

In May of 1938 Hans Severus Ziegler organized the Entartete Musik, which ridiculed the work of degenerate composers. When Austria and Czechoslovakia were invaded that year Nazi cultural policies were instated and many musicians were sent to concentration camps.

Results of Incident: Many of the musicians who left Germany during the Nazi era found it hard to work in their new environment and some found their careers ended. In the 1970s many of these composers were rediscovered. In the 1990s a series of CDs came out called Entartete Musik, which featured the works of the musicians that were persecuted under the Nazis.