Eva Green: Sin City a Dame to Kill For

Description of Artwork: The movie poster for the sequel to Sin City showcases actress Eva Green leaning near a window. She is wearing a sheer, white gown and pointing a gun in the air. The window cast shadows across her body alluding to the dark nipple area that the MPAA reacted to.

The Incident: The poster for the movie Sin City: A Dame to Kill For has been banned by the MPAA "for nudity — curve of under breast and dark nipple/areola circle visible through sheer gown." 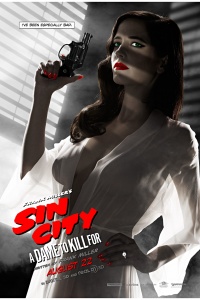