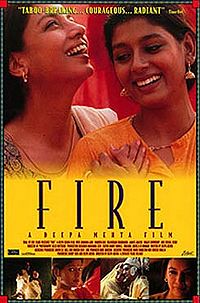 Description of Artwork: Mehta's film, Fire is about a love affair between two sisters-in-law.

The Incident: The film was removed from theaters in the cities of New Delhi, Bombay, Surat and Pune after members of the Shiv Sena party attacked the facilities.

Results of Incident: The Junior information and Broadcasting Minister, Mukhtar Abbas Naqvi, decided to review the film and decide whether or not it should be banned.